One of the first articles that appeared on the original Kolbe Center website is entitled “The Difference It Makes: The Importance of the Traditional Doctrine of Creation.” It answers the frequently-asked question: “What difference does it make whether God used six days of fiat creation or billions of years of evolution, as long we believe that He did it?”

Reason number five has gained a special relevance in the light of the COVID-19 epidemic. It explains:

The traditional understanding offers hope for the future of mankind. Theistic evolutionism fosters either a false hope or a deep despair.

The traditional understanding of Genesis confers hope. It gives Christians confidence that the same beautiful harmony that existed throughout the whole universe “in the beginning” will be restored “in the end” through the working of the Holy Spirit. It also strengthens men’s faith in the credibility of the prophecies of numerous canonized saints who have foretold a future flowering of Christianity before the final judgment and the end of the world when many of the characteristics of the first created world will be restored. The Christian who comprehends and believes in the patristic understanding of creation also has the capacity to reconcile the occurrence of death-dealing natural disasters with the absolute goodness of God who wills no evil. In light of the traditional understanding of Genesis, the faithful know that destructive natural disasters do not reflect the natural order as it came forth from God’s hands. Moreover, they understand that such disasters result directly or indirectly from the sins of mankind, and that they have a twofold purpose – first, to correct sinners, and, second, to bring them to repentance. According to the traditional doctrine of creation, the first created world operated in perfect harmony and subordination to Adam and Eve, so long as they in turn remained subordinated to the Divine Will. The course of nature as we know it today resulted from a curse imposed on nature by God after Adam’s fall. With this in mind, the traditional understanding inspires a fervent hope that each repentant sinner and divinized saint brings the world one step closer to the day when the wolf will lie down with the lamb. 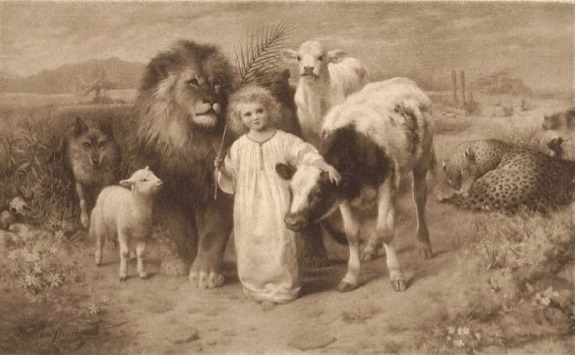 Theistic evolutionism cannot conceive of an original harmonious state of the universe, and thus either dismisses prophecies of a future restoration of the world before the final judgment or misinterprets them as referring to some kind of Teilhardian evolution of consciousness. In general, theistic evolutionism leads its adherents to believe that God deliberately ordained a struggle for existence and a process of natural selection as his means for producing the human body through secondary causes. For the theistic evolutionist, man-harming natural disasters, such as tsunamis, earthquakes, and volcanoes, are just part of the ordinary course of nature as created by God from the beginning. Consequently, the theistic evolutionist does not see the connection between natural disasters and men’s sins, and thus fails to interpret “the signs of the times.” Faced with the painful reality of natural disasters, he either lives in a constant state of denial that God uses such events to accomplish His purposes without regard to human sin, or else he falls into despair at the contradiction between such a god and the God of love revealed in the Bible.

If one reflects on the reasoning of civil and ecclesiastical decision-makers around the world in regard to church closings, it is remarkable how profoundly their understanding (or lack of understanding) of the truths just summarized factors into their decision to close churches and imprison violators (as in my home state of Virginia) or to leave the churches open with reasonable safeguards against the spread of infection, as in Poland.

Let us use this penitential season to spread the truth about creation, as this truth can help souls to make sense of the current crisis and turn it into an occasion for repentance, conversion and growth in holiness.

P.S. It is highly instructive to look at the historical background of the Church’s most important dogmatic decree on creation, the Firmiter of Lateran IV. As this talk from our 2019 leadership retreat explains, the foundation of the Dominican Order and the formulation of the Firmiter decree were both responses toheretical movements that denied the very same truth that theistic evolutionism and progressive creationism deny – the special creation by God of all of the different kinds of plants and animals for man at the beginning of time, as reflections of His perfect goodness, wisdom and love for us.

P.P.S. If you go to www.foundationsrestored.com and read the unsolicited comments, you will see the great impact that the DVD series is having on souls all over the world. With the Coronavirus restrictions on public meetings and liturgical services, now is a perfect time to encourage friends, family, and other Catholics to watch the DVD series as part of their Lenten exercises. If finances are a problem for any of your contacts, please encourage them to contact me and we will be glad to make the series available to them for whatever part of the suggested donation they can afford.